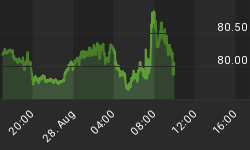 The End Of The Oil Price Rally

Oil prices slipped this week as unexpected builds in gasoline inventories due to a drop in demand with driving season coming to an end.

Oil prices are set for their largest weekly loss since July, due to fears of emerging market contagion and some bearish data from the EIA.

Mixed EIA report, oil prices fall. Crude oil prices fell sharply this week after the EIA revealed a surprising build in gasoline inventories, suggesting that peak summer driving season has come to a close and could usher in a softer period of demand. The news overshadowed a strong decline in crude oil inventories.

Saudi Arabia ramps up oil shipments to United States. Saudi oil exports to the U.S. jumped above 1 million barrels per day last week (four-week average) for the first time since 2017, according to EIA data. Shipments are also up 250,000 bpd compared to May, perhaps an indication that Saudi Arabia is responding to political pressure from the American lawmakers.

Transocean buying Ocean Rig for $2.7 billion. Transocean (NYSE: RIG) announced a move to take over Ocean Rig (NASDAQ: ORIG), a rival offshore drilling contractor, for $2.7 billion. The deal will give Transocean twice as many deepwater rigs and drillships as its nearest competitor, according to the Houston Chronicle. The acquisition is also a sign of the faith that Transocean has in the growth of the offshore drilling sector (more below), which has lagged onshore shale, for instance. "Adding Ocean Rig's premium assets to our industry-leading fleet ... better positions us to capitalize on what, we believe, is an imminent recovery in the ultra-deepwater market," Transocean President and Chief Executive Jeremy Thigpen said.

Offshore activity shows signs of rebound. A recent report from IHS Markit projects that global demand for mobile offshore drilling rigs will increase by 13 percent through 2020 as the oil industry steps up offshore exploration. IHS says there will be demand for an average of 521 rigs in 2020 up from 453 this year.

Midstream giants team up for new Permian pipeline. Energy Transfer Partners (NYSE: ETP), Magellan Midstream Partners (NYSE: MMP), Delek Group, (TLV: DLEKG) and MPLX (NYSE: MPLX) have decided to jointly fund the “Permian Gulf Coast Pipeline,” another major conduit that will connect the Permian to the Gulf Coast. The target in-service date is mid-2020. The announcement adds yet another pipeline to the mix – there are already several projects in the works to expand midstream capacity from West Texas.

Schlumberger, Halliburton warn of Permian slowdown. The CEOs of Schlumberger (NYSE: SLB) and Halliburton (NYSE: HAL) admitted this week at an industry conference that they are seeing activity in the Permian slowdown. Pipeline constraints have not yet curtailed production growth, but the oilfield service companies, who are on the frontlines and have a good vantage point on drilling activity, have already felt the impact. “These challenges will likely have a dampening effect on production growth, wellhead prices and investment levels in the coming year,” Schlumberger’s CEO Paal Kibsgaard said at the Barclays conference in New York. Also, Kibsgaard said that the assumption that Permian production will grow at a 1.5-mb/d annual rate is “starting to be called into question.”

Mexico’s President to build country’s largest oil refinery. Mexican president-elect Andres Manuel Lopez Obrador (AMLO) offered more details on his plans to build a new oil refinery. “It will be a refinery that will produce 400,000 barrels per day of gasoline with an approximate cost of $8 billion that we want to build in three years,” Lopez Obrador told a group of business leaders, according to Reuters. Meanwhile, Bloomberg reports that AMLO may not suspend future oil auctions after all.

Chevron downgraded. Bank of America Merrill Lynch downgraded Chevron’s (NYSE: CVX) to “neutral” from “buy” because the bank says that the renewal on several of Chevron’s key projects in Asia may be harder to obtain than some think. Specifically, BofAML cited Chevron’s “emerging uncertainties around spending and PSC [production sharing contract] renewals [and] a more selective sector view that acknowledges the tailwind from the commodity as largely played out.” Several “key production sharing contracts” expire in 2021-2023.

Chevron launches predictive maintenance campaign. Chevron (NYSE: CVX) announced the beginning of a predictive maintenance campaign, equipping refineries and oil fields with sensors, cloud computing, data analytics and a variety of other technologies often referred to as “predictive analytics,” that promise to precisely predict when assets need maintenance and head off problems before they arise. These suite of new technologies could potentially save oil companies millions of dollars. “In the past, we had to figure out how equipment was performing,” Chevron’s Chief Information Officer Bill Braun told the Wall Street Journal. “In the future, the equipment will tell us how it’s performing. This represents a big shift.”