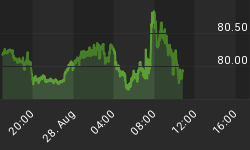 Several of the world’s top oil officials are gathering in Algiers this week for the International Energy Forum, set to take place from Sept. 26-28. But the real show will be on the sidelines: OPEC and several key non-OPEC countries will meet informally to discuss potential coordination on production limits.

Meanwhile, oil prices traded up more than 3 percent on Monday in anticipation that OPEC could announce progress towards a production freeze. But that came after several rocky trading sessions in recent days, with oil prices plunging by more than 5 percent last week. Bullish bets from oil speculators have dropped to one-month lows, Reuters says, after news surfaced that Saudi Arabia and Iran failed to reach a consensus after meeting in Vienna just ahead of the Algiers meeting.

The anticipation surrounding the meeting in Algeria has pushed price volatility up to its highest level since April, which was not coincidentally the last time that OPEC raised expectations of coordinated action.

But this time around OPEC is probably wary of disappointing the market yet again, which would diminish whatever credibility they have left. Therefore, the chances of at least the semblance of cooperation is necessary. Still, OPEC officials have repeatedly said that the meeting is an informal one, not a meeting for decision-making. One possible outcome is that the group issues a statement saying there is some form of consensus around a production freeze, to be finalized at a future meeting, perhaps at its scheduled November meeting in Vienna.

The effect of a production freeze, as has been widely noted, would likely be minimal on supplies, given the record levels of production from OPEC members and Russia. It might provide a psychological boost to the market, pushing up oil prices temporarily, but with huge volumes of oil potentially coming back online in Libya and Nigeria, market sentiment will move beyond the result from Algeria and eventually focus on the fundamentals once again, which do not look good. Related: Tax Troubles Threaten Russia’s Arctic Megaproject

Even if the unthinkable were to happen at some point – which nobody is predicting – and OPEC somehow agrees to a production cut, as opposed to just a freeze, even that result would be less bullish than many analysts might expect. Cutting output may limit supplies today, but it also builds up spare capacity, which will eventually come back online as the market improves. “The catch of cutting oil production is that if OPEC and Russia decide to cut then these volumes will eventually move back into the market again,” Bjarne Schieldrop, chief commodities analyst at SEB, noted in an emailed statement.

Cutting output may appear to balance the market, but the real adjustment will take longer than it seems. First the record levels of inventories will need to be drawn down, a fact that could take years given the massive volume of oil and refined products currently sitting in storage. Moreover, that process will take longer than previously expected – the IEA said last week that the oil market will continue to see inventory builds through next year.

After inventories start to fall, then there would be the additional latent capacity that was built up from the hypothetical OPEC output cut. Saudi Arabia and fellow OPEC producers would return supply to the market. From there, they could ramp up production with new drilling. Oil above $100 per barrel seems to be a long way off. Related: Low Oil Prices Are Not The Reason Oil Companies Are Going Bankrupt

That is all a bit academic since a production cut is not really on the table. But even the more modest goal of a production freeze seems to be unrealistic, given the very large capacity on the verge of coming back in Libya and Nigeria. More than 800,000 barrels per day already returned to the market between August and September from around the world, and more gains are possible. "They will come away with nothing, because it is too difficult. How can they decide a freeze when Libya is on the doorstep of returning production, or Nigeria for that matter?" Schieldrop said, according to Reuters.

The hype surrounding the Algiers gathering, then, exceeds the meeting’s potential. OPEC, having failed to create a consensus about the group’s role in today’s oil market, has been reduced to relying only on its ability to move oil prices through media rumors. As Bjarne Schieldrop of SEB summed it up in a statement: “We don’t think that there will be any resolution and decision at the meeting. But we do think that OPEC’s members will show a united front as was the case the last time they met in June.”