Tesla’s Got Some Bad News For Cobalt Miners

Benchmark Mineral Intelligence, a provider of price information and research on battery supply chains, parsed the numbers after Tesla gave a rare indication of the relative proportions of raw materials used in its latest lithium-ion battery for its Model 3.

At first blush it’s not good news for miners of cobalt, a crucial ingredient in batteries used in electric vehicles and cellphones that's been trading near decade highs above $90,000 a tonne.

Nickel-Manganese-Cobalt (NMC) batteries favoured by most vehicle makers contain around 20 percent cobalt. Tesla is a proponent of nickel-cobalt-aluminium (NCA) technology which requires less than a third the amount of cobalt.

Musk said on Wednesday the cobalt content of its NCA cathode chemistry “is already lower than next-generation cathodes that will be made by other cell producers with a nickel-manganese-cobalt ratio of 8:1:1″.

Benchmark said over six years – from the Roadster to the Model 3 – the EV producer has reduced its cobalt needs by 59 percent on average per vehicle.

Tesla’s U.S. rivals and Japanese, Korean and German automakers have a lot of catching up to do when it comes to thrifting which suggests cobalt producers should not lose too much sleep:

Since their inception, cathode and battery manufacturers have been working on reducing their cobalt dependency as this is the most expensive raw material input.

With NCM, a number of formulations have been developed over the last 25 years, each with a lower cobalt intensity usage than the next.

The end game with this chemistry is to develop NCM811, to which Elon Musk’s refers to. However, this is still a number of years away from widespread commercial adoption due to lifecycle and safety concerns but will offer a lower raw material costs and improved energy density.

In fact, Benchmark only expects NCM811 to have a material impact on the lithium ion battery industry from 2022 onwards when we forecast it to account for 10 percent of the cathode market. Related: Eight Geopolitical Risks That Could Send Oil Prices Surging

Annual production cobalt is only around 100,000 tonnes primarily as a byproduct of nickel and copper mining with more than 60 percent coming from the Democratic Republic of the Congo, where fears about political instability and the challenges of ethical sourcing combine to supercharge supply concerns. 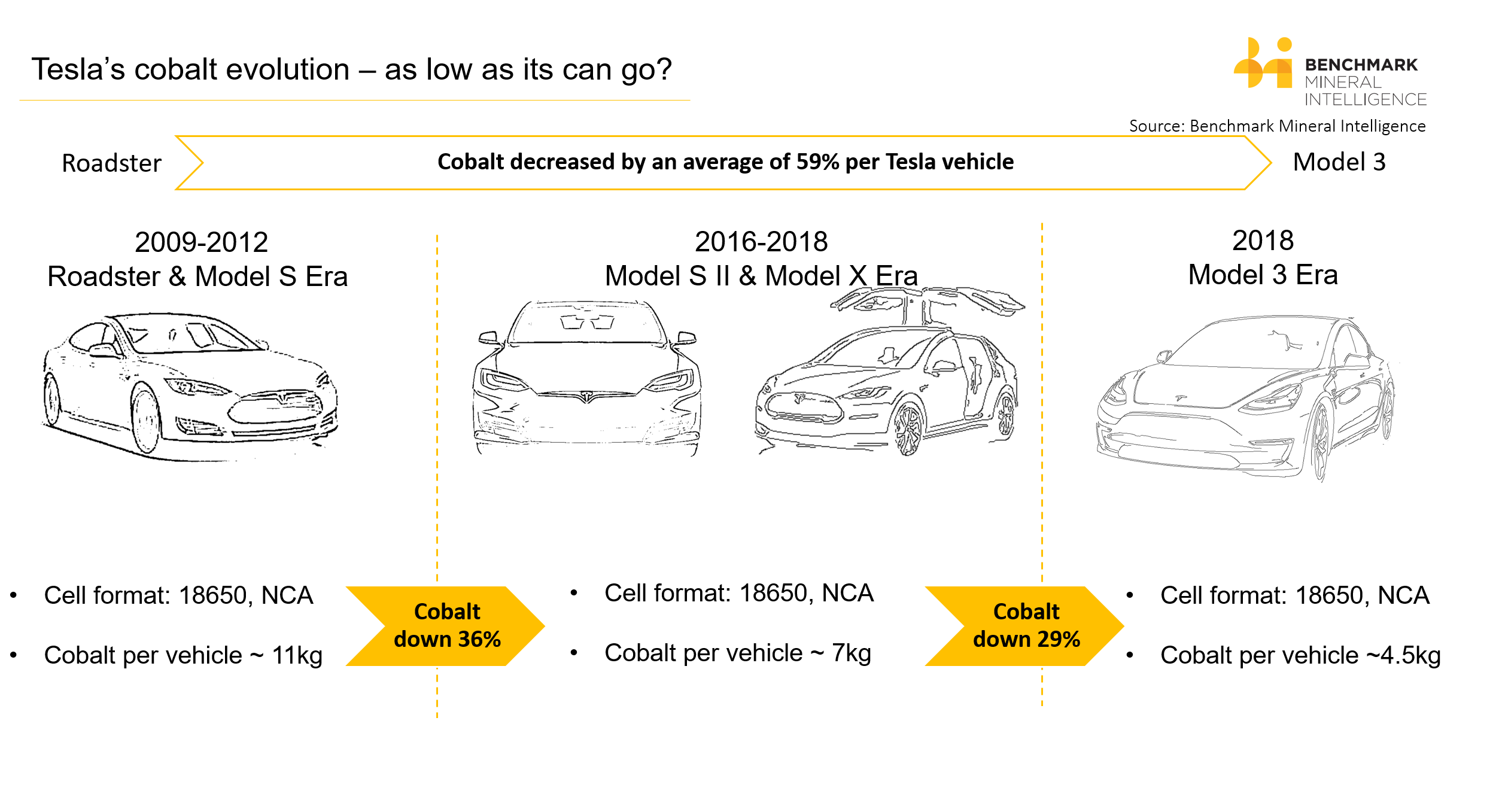 Another significant difference between Tesla and other automakers has been its use of induction motors in its Roadster and S models, which unlike permanent magnet traction motors features no rare earths elements.

Car manufacturers are keen to reduce reliance on rare earths, which like cobalt, suffers from highly concentrated supply and unpredictable pricing, with China holding a virtual global monopoly in primary supply and processing.

What this argument ignores however is that induction motors are upwards of 15 percent less efficient than permanent magnet traction motors.

But with the Model 3, which Tesla hopes would turn it into a mass-market success and not just a niche luxury car manufacturer, the company has ditched induction motors.

In a recent interview with Electrek, Tesla’s principal motor designer justified the switch as a “tradeoff between motor cost, range, and battery cost” and explained that “the permanent magnet machine better solved [Tesla’s] cost minimization function, and it was optimal for the range and performance target”.

New research by Adamas Intelligence, a strategic metals and minerals advisory, suggest that the switch back to permanent magnet motors in the Model 3 comes with significant costs savings:

It can be observed that the direct bill of materials for a PM traction motor is approximately 15 percent higher than that of a comparable induction motor – primarily because of NdFeB magnet costs – a fact that proponents of induction motors often cite as the architecture’s main advantage. Related: Higher Oil Prices Are OPEC’s Only Concern

What this argument ignores however is that induction motors are upwards of 15 percent less efficient than PM traction motors, especially at low speeds, thus an automaker using an induction motor may need to compensate with a larger (and costlier) battery pack so as to offer a competitive driving range (mileage per charge).

The cost of increasing the capacity of a 60-kWh battery pack by just 5 percent to compensate for use of an induction motor can increase powertrain costs by upwards of $300 (optimistically assuming an added cost of just $100/kWh), suggesting that use of a PM traction motor is substantially more economically attractive despite higher direct material costs.

Robots And Drones Are Changing The Offshore Oil Industry