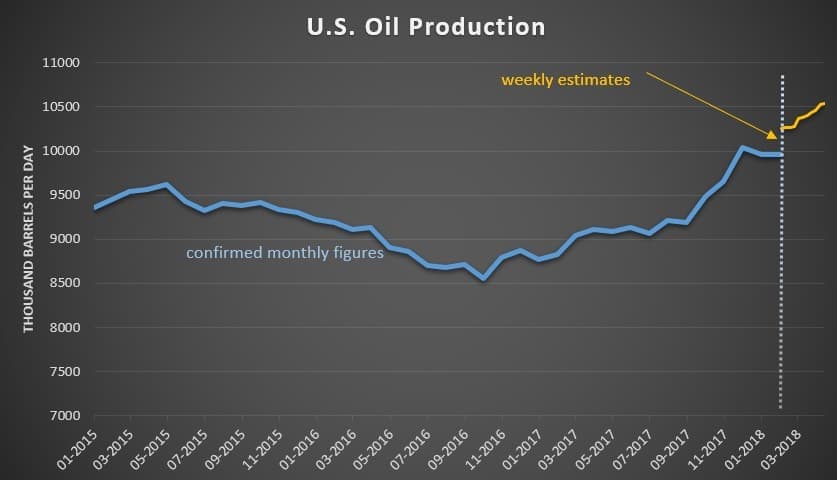 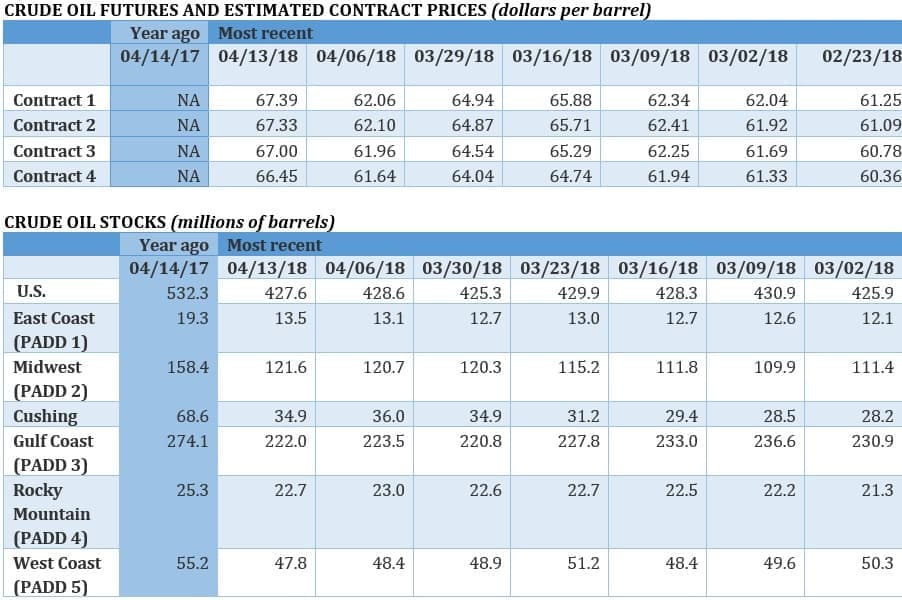 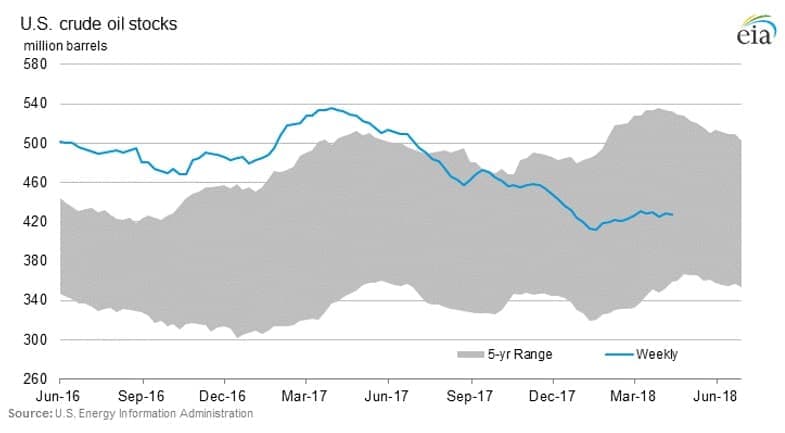 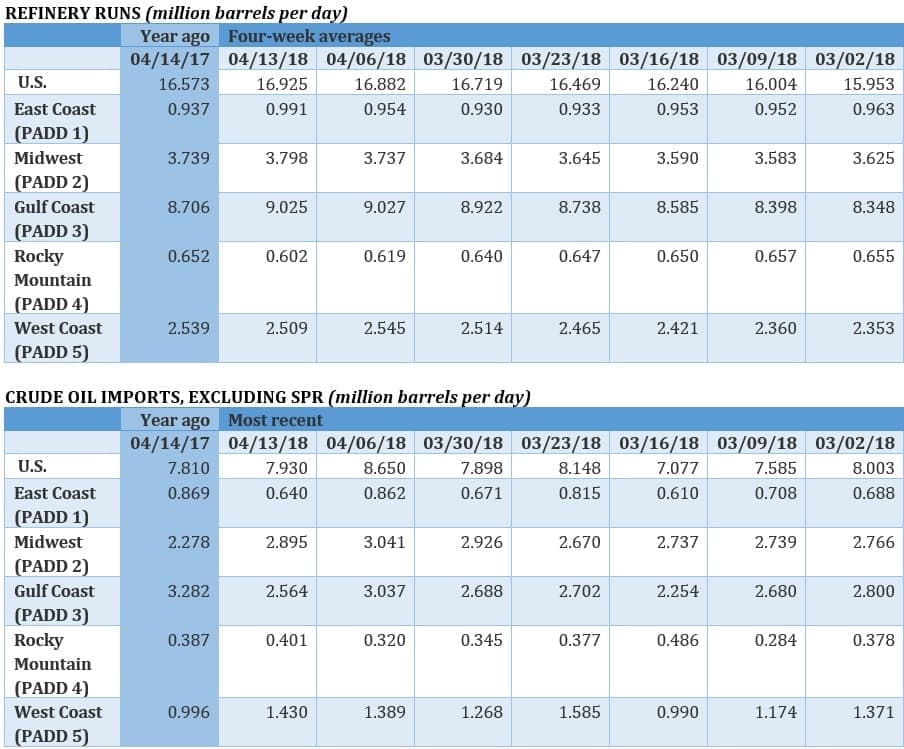 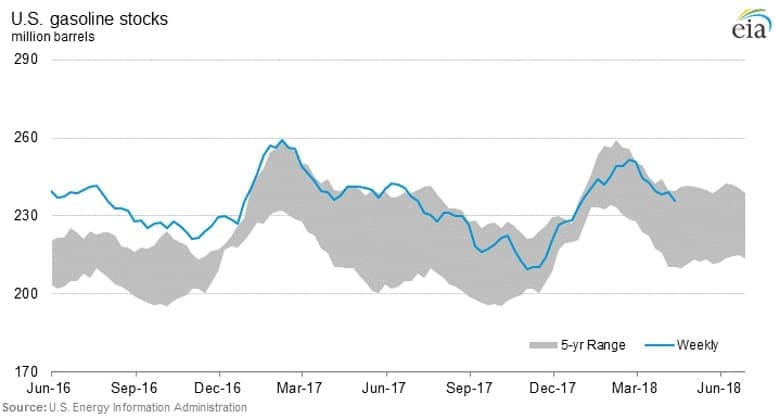 Geopolitics and an ever-tightening oil market are pushing prices up to fresh multi-year highs. “Brent crude oil is ticking higher by the day as OPEC+ cuts are intact, global oil demand growth is firm…Venezuela oil production is in a death spiral, renewed Iran sanctions are imminent (12 May) and sanctions towards Russia on oil and not just aluminum is possible,” Bjarne Schieldrop, chief commodities analyst at SEB, wrote in a note. “Barring a global recession we think there is more room on the upside and as we stated in early march, if OPEC+ sticks to its cuts we are likely to see $85/bl later in the year as inventories draw lower.”

Trump criticizes OPEC in tweet. In an early morning tweet on Friday, President Trump took aim at OPEC. “Looks like OPEC is at it again. With record amounts of Oil all over the place, including the fully loaded ships at sea, Oil prices are artificially Very High! No good and will not be accepted!” His tweet helped reverse the gains for crude benchmarks, although the effect will likely be brief.

Phasing out OPEC cuts premature. Saudi oil minister Khalid al-Falih said that OPEC will phase out its cuts so as not to shock the market, but that it would be premature to discuss such plans at the June meeting. He also said that the global economy could tolerate higher oil prices and that there wouldn’t be demand destruction. The comments suggest OPEC is set on keeping the limits in place for the rest of this year. Still, OPEC is meeting in Jeddah to take stock of the market, and the data suggests that they have just about eliminated the inventory surplus, which means that keeping the cuts in place could help drive up prices. “The petro-nations seem willing to over-tighten the market, with the current price levels fostering confidence in their supply deal,” Norbert Ruecker, head of macro and commodity research at Julius Baer, wrote in a note.

Explosion at Valero refinery in Texas. An explosion occurred at Valero’s (NYSE: VLO) Texas City refinery on Thursday. No injuries were reported.

Interest in Houston and Midland contracts rise. WTI is beginning to lose its luster as the premier oil benchmark price in the U.S., as oil traders are gaining interest in alternative pricing metrics, such as prices based in Houston or Midland. As the U.S. becomes a larger crude oil exporter, on top of the growth of refining and petrochemical capacity along the Gulf Coast, oil prices based in Houston are starting to become more relevant to traders and purchasers. Meanwhile, upstream production is surging in the Permian, making Midland relatively more important. Bloomberg reports that a spike in trades on futures contracts that track the differential between WTI and Houston or WTI and Midland. If the trading practice continues to blossom, WTI might eventually give way to a Houston benchmark as the top marker for North American crude.

Chevron employees arrested in Venezuela. Venezuelan authorities arrested two employees from Chevron (NYSE: CVX), the first workers directly employed by a foreign oil company to be detained in the country. Venezuela’s oil production is collapsing, and if the government scares away some of the private companies operating in the country, it could jeopardize even more of its output. Roughly half of Venezuela’s oil production comes from joint ventures with private companies.

Oilfield services likely to disappoint on Q1 earnings. The oilfield services sector will likely report disappointing first quarter earnings due to bad weather, and overcapacity in fracking equipment, according to Reuters. Schlumberger (NYSE: SLB), Halliburton (NYSE: HAL) and GE’s (NYSE: GE) Baker Hughes are all expected to report a decline in profits, quarter-on-quarter.

Exxon could lose deal in Iraq. Negotiations between Iraq and ExxonMobil (NYSE: XOM) over a multi-billion-dollar infrastructure contract have gone south, according to Reuters. The two sides have been in discussions for more than two years over a water treatment facility and pipelines to help increase oil production, which would also include the rights to develop two oil fields in Iraq’s south. Reuters says they are far apart on pricing and Iraq may award a contract to another company.

3 LNG tankers move through Panama Canal. Three LNG tankers passed through the Panama Canal on the same day this week, the first time that has occurred since the expansion of the canal was completed. The shipment through the canal could open up more LNG trade. “You’re going to have a lot of these plants up and running and you need the logistics to get those cargoes” through the canal, Sam Margolin, lead analyst at Cowen and Company LLC in New York, told Bloomberg. The increased traffic “should make people feel a lot more confident about the U.S.’s ability to place LNG in China.”

CNPC and Petrobras close to a refinery/oil swap deal. Brazilian state-owned oil company Petrobras is nearing a deal with China’s CNPC, which would see a large investment from CNPC in a Brazilian oil refinery, and in exchange, CNPC would receive oil shipments. If it goes forward, it would mark CNPC’s first refining asset in the Americas. CNPC could also receive stakes in offshore oil fields in the Campos basin.