The assassination of General Soleimani…

Just days after Beijing officially launched  Yuan-denominated crude oil futures (with a bang, as shown in the chart below, surpassing Brent trading volume) which are expected to quickly become the third global price benchmark along Brent and WTI, China took the next major step in the challenging the Dollar's supremacy as global reserve currency (and internationalizing the Yuan) when on Thursday Reuters reported that China took the first steps to paying for crude oil imports in its own currency instead of U.S. Dollars. 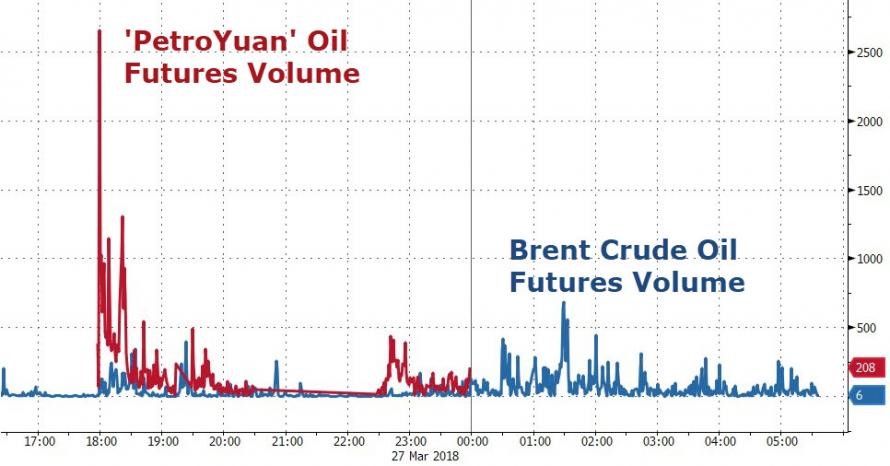 A pilot program for yuan payment could be launched as soon as the second half of the year and regulators have already asked some financial institutions to "prepare for pricing crude imports in the yuan", Reuters sources reveal.

According to the proposed plan, Beijing would start with purchases from Russia and Angola, two nations which, like China, are keen to break the dollar’s global dominance. They are also two of the top suppliers of crude oil to China, along with Saudi Arabia. Related: U.S. Petroleum Imports Could Fall To Zero In 2020

A change in the default crude oil transactional currency - which for decades has been the "Petrodollar", blessing the U.S. with global reserve currency status - would have monumental consequences for capital allocations and trade flows, not to mention geopolitics: as Reuters notes, a shift in just a small part of global oil trade into the yuan is potentially huge. "Oil is the world’s most traded commodity, with an annual trade value of around $14 trillion, roughly equivalent to China’s gross domestic product last year." Currently, virtually all global crude oil trading is in dollars, barring an estimated 1 per cent in other currencies. This is the basis of U.S. dominance in the world economy.

However, as shown in the chart below which follows the first few days of Chinese oil futures trading, this status quo may be changing fast.

Superficially, for China it would be a matter of nationalistic pride to see oil trade transact in Yuan: "Being the biggest buyer of oil, it’s only natural for China to push for the usage of yuan for payment settlement. This will also improve the yuan liquidity in the global market,” said one of the people briefed on the matter by Chinese authorities.

There are other considerations behind the launch of the Yuan-denominated oil contract as Goldman explains:

• A commercial benchmark and hedging tool. Until now, Chinese oil imports were based on FOB benchmarks, with long-term procurement contracts settling off Platts Oman/Dubai or Dated Brent. The INE contract has therefore the potential to become the pricing reference for CIF China crude oil, enabling corporate financial hedging. Its warehouse structure is however likely to limit its use for physical crude delivery and may in fact at times reduce its hedge efficiency.

• A new investment vehicle for onshore investors. The majority of China commodity futures trading volumes are from retail investors, yet these had until now little ability to trade oil futures. China’s capital control was the main bottleneck to trading contracts like Brent as authorities only allow $50,000 outflow a year per person. While several petrochemical and bitumen contracts already trade in China, INE will be the first contract for crude oil, likely drawing significant interest. 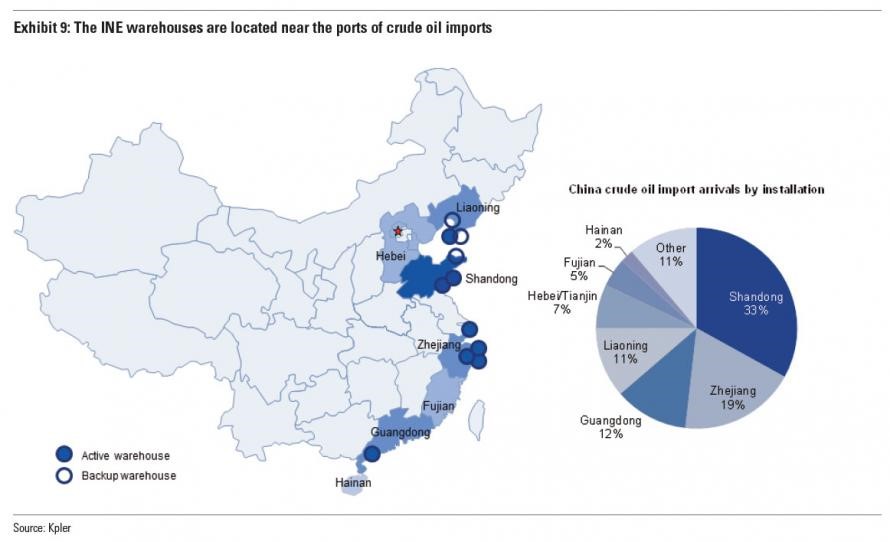 The danger, of course, is that such a shift would also boost the value of the Yuan, hardly what China needs considering it was just two a half years ago that Beijing launched a controversial Yuan devaluation to boost its exports and economy. 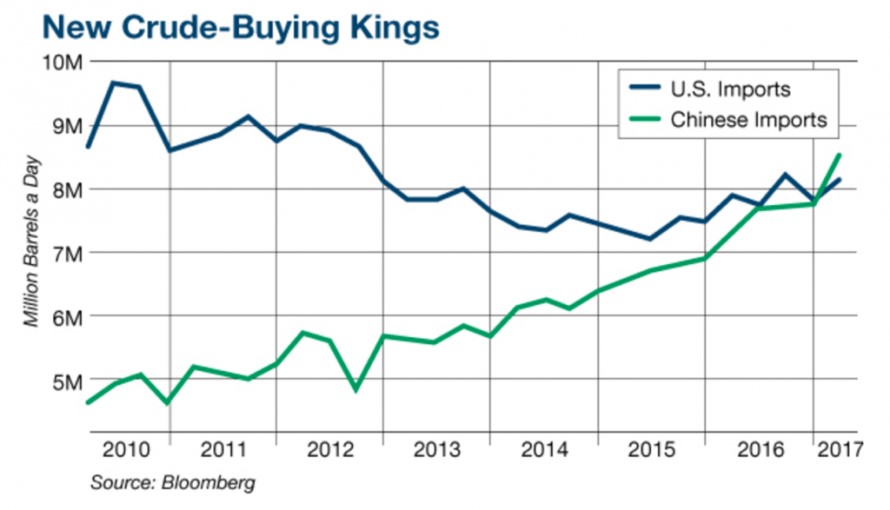 Still, in light of the relative global economic stability, Beijing may be willing to take the gamble on a stronger Yuan if it means greater geopolitical clout and further acceptance of the renminbi.

Which is why restructuring oil fund flows may be the best first step: as of this moment, China is the world’s second-largest oil consumer and in 2017 overtook the United States as the biggest importer of crude oil; its demand is a key determinant of global oil prices.

If China's plan to push the Petroyuan's acceptance proves successful, it will result in greater momentum across all commodities, and could trigger the shift of other product payments to the yuan, including metals and mining raw materials.

Besides the potential of giving China more power over global oil prices, "this will help the Chinese government in its efforts to internationalize yuan," said Sushant Gupta, research director at energy consultancy Wood Mackenzie. In a Wednesday note, Goldman Sachs said that the success of Shanghai’s crude futures was “indirectly promoting the use of the Chinese currency (which, however as noted above, has negative tradeoffs as it would also result in a stronger Yuan, something the PBOC may not be too excited about).

Meanwhile, China is wasting no time, and Unipec, the trading arm of Asia’s largest refiner Sinopec already signed a deal to import Middle East crude priced against the newly-launched Shanghai crude futures contract, which incidentally is traded in Yuan.

The bottom line here is whether Beijing is indeed prepared and ready to challenge the U.S. Dollar for the title of global currency hegemon. As Reuters notes, China’s plan to use yuan to pay for oil comes amid a more than year-long gradual strengthening of the currency, which looks set to post a fifth straight quarterly gain, its longest winning streak since 2013.

In a sign that China's recent Draconian capital control crackdowns have sapped market confidence in a freely-traded Yuan, the currency retained its No.5 ranking as a domestic and global payment currency in January this year, unmoved from a year ago, but its share among other currencies fell to 1.7 percent from 2.5 percent, according to industry tracker SWIFT.

A slew of measures put in place in the last 1-1/2 years to rein in capital flowing out of the country amid a slide in yuan value has taken off some its shine as a global payment currency.

But the yuan has now appreciated 3.4 percent against the dollar so far this year, with solid gains in recent sessions.

“For PBOC and other regulators, internationalization of the yuan is clearly one of the priorities now, and if this plan goes off smoothly then they can start thinking about replicating this model for other commodities purchases,” said a Reuters source.

Still, it will be a long and difficult climb before the Yuan can challenge the dollar and for Beijing to shift the bulk of its commodity purchases to the yuan because of the currency’s illiquidity in forex markets. According to the latest BIS Triennial Survey, nearly 90 percent of all transactions in the $5 trillion-a-day FX markets involved the dollar on one side of a trade, while only 4 percent use the yuan.

Still, not everyone is convinced that the new Yuan-denominated contract will create a "petro-yuan" as the following take from Goldman highlights:

The launch of the INE contract is not just about oil, as it will also be the first Yuan denominated commodity contract tradable by offshore investors. Such a set-up meets the PBOC’s monetary policy committee goal to raise the profile of its currency in the pricing of commodities. It has raised however the question of whether the INE contract is an incremental step in achieving the currency reserve status for the Yuan. We do not believe so.

While the INE launch does represent an additional step in the CNY internationalization, the CNY denomination of the INE contract does not in itself imply CNY investments. The INE contract does not represent an opening of China’s capital accounts since foreign deposits operate in a closed circuit, deposited in designated accounts and not to be used to purchase other domestic assets. In practice, the collateral deposit and any capital gains can be transferred back to offshore accounts. The potential for greater foreign ownership of Chinese assets is therefore not impacted by CNY oil invoicing and would require instead oil exporters to recycle their proceeds in local assets, for example. The incentive to do this has not changed with the introduction of the INE contracts. In particular, most Middle East oil producers still have currencies pegged to the dollar and limited ability to hedge CNY exposure.

Whether or not Goldman is right remains to be seen, however it is undeniable that a monumental change is afoot in global capital flows, where the U.S. - whether Beijing wants to or not - will soon be forced to defend its currency status as oil exporters (and investors in this highly financialized market) will now have a choice: go with U.S. hegemony, or start accepting Yuan in exchange for the world's most important commodity.