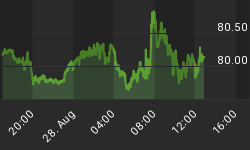 Crude oil stockpiles in the United States are at record levels and, with no place to go, oil inventories may continue to build because of the accelerating rate of production from shale operations.

The U.S. Energy Information Administration said April 23 that crude oil stockpiles along the Gulf Coast in an area known as Petroleum Administration for Defense District 3 (PADD 3) have reached more than 209 million barrels, the highest level since 1990.

Inventories at the storage hub in Cushing, Oklahoma, meanwhile, are at their lowest levels since 2009, at 26 million barrels.

More oil is flowing to PADD 3 because of expanding infrastructure in the region.

A few years ago, the Cushing hub was awash in oil that had few options for delivery to Gulf Coast refineries. In January, TransCanada opened the Gulf Coast project, a 487-mile pipeline from Cushing. It will deliver 520,000 barrels of oil per day (bpd) in its first year in service and eventually deliver 830,000 bpd.

The Seaway pipeline, a 50-50 joint venture between Enterprise Products Partners and operator Enbridge, was reversed in 2012 and now sends around 400,000 bpd out of Cushing.

Oil production in the United States, meanwhile, continues to gain steam and stood at 8.36 million bpd for the week ending April 18.

Imports from members of the Organization of Petroleum Exporting Countries continue to decline. Saudi Arabia delivered 1.3 million barrels to the U.S. market for the week ending April 18, though that level was down more than 500,000 barrels from the previous week.

Legislation enacted in response to the Arab oil embargo in the 1970s restricts crude oil exports, so most of the oil at PADD 3 now may accumulate. Most refiners prefer to process a heavier grade of crude than what's produced in the United States, so the U.S. market isn't necessarily breaking free from imports. Crude oil imports into PADD 3 increased to 4.59 million bpd, an 11 percent increase from March 14.

An increase in crude oil deliveries by rail may spread deliveries elsewhere in the U.S. market, however. More than 400,000 carloads of crude left the Bakken play in North Dakota last year, up from the 9,500 carloads reported in 2008. That means some oil can get to East Coast refineries that would otherwise depend on imports.

The glut of U.S. crude is keeping the price for West Texas Intermediate low, while Brent prices feel pressure from international issues in Ukraine.
That, in theory, should keep prices for oil products, including gasoline, lower in the United States, although low U.S. demand means more products are headed overseas.

While production is up, the U.S. market isn't yet feeling the benefit from the easing of the Cushing bottleneck. If the Obama administration eventually approves Keystone XL, that trend could continue.