And it could mean good times ahead for MCW’s stock,
and early-bird investors who get in now

The Oil: MCW Energy (MCWEF) holds the leases to an estimated 87 million barrels of recoverable oil reserves worth $4 billion at today’s prices.

The Challenge: The oil is trapped in sand. In the past, separating the oil from the sand has required vast amounts of water and has resulted in widespread environmental damage.

The Solution: MCW Energy has a patent pending on a new green technology that is designed to remove 99.9% of the oil, without using an ounce of water. Better yet, the process actually leaves the environment cleaner than when MCW arrived!

The Opportunity: Investors who get into MCW Energy now could be in for a nifty profit ride as the Company continues to tap its oil reserves and begins licensing its green technology to other companies.

Take a closer look below…


If you’ve ever considered investing in oil stocks, then we believe you should know about MCW Energy — a Canadian oil company with terrific investment potential. Here are six things to us that set this company apart:

MCW Energy Group holds two leases in the oil sands of Utah, with an estimated 87 million barrels of recoverable reserves. 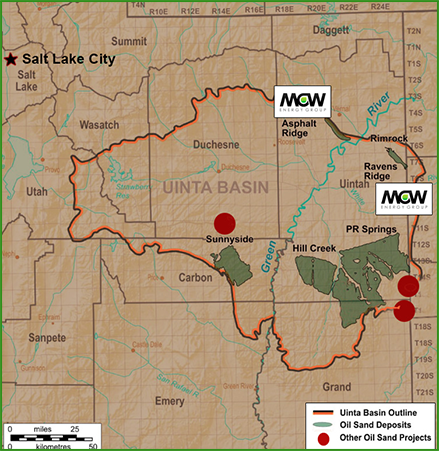 The first is 1,128 acres of oil sands located approximately 10 miles from Vernal, Utah. Vernal is the state’s main hub for oil exploration and development.

The second is 1,100 acres of oil sands at nearby Temple Mountain.

Geologists estimate that the two leases hold a combined 87 million barrels of recoverable reserves worth $4 billion at today’s prices.

In other words, it’s oil that MCW can extract at a reasonable price with technology that’s available today. And MCW owns every last drop.

Patent-Pending Green Technology for Extracting All That Oil: 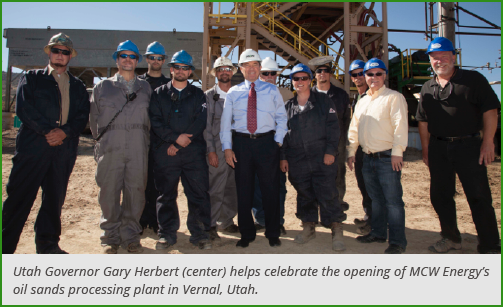 Mining oil from oil sands has traditionally been a messy affair.

Most conventional methods require using three barrels of water for every barrel of oil extracted. This results in massive “tailing ponds” that leave the environment resembling a toxic wasteland.

However, MCW Energy (MCWEF) has a patent pending on a potential breakthrough technology that extracts the oil without requiring water, without releasing any waste or pollutants and without despoiling the environment.

Instead, it uses harmless, environmentally-benign solvents that literally draw 99.9% of high grade crude oil out of the sand. It’s similar to how soap washes grease off a plate.

Once the oil has been safely extracted, the clean sand is then returned to its source — minus the messy, ugly oil.

You can even grow plants in the processed sand — something that’s impossible when it’s contaminated with oil.

MCW recently opened a plant for processing its oil sands: 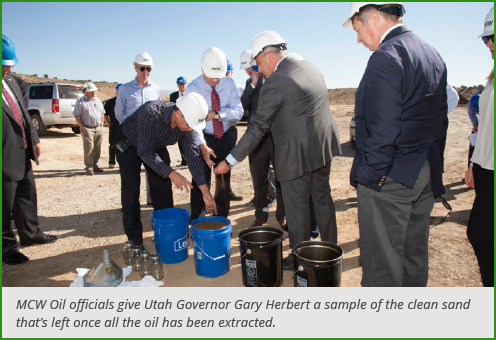 Utah Governor Gary Herbert and members of his staff attended the grand opening and promised MCW the state of Utah’s full support.

The plant can produce 91,250 barrels of oil a year at a cost of around $30 a barrel. That’s low enough to give MCW a nice profit despite the current oil price slump.

By comparison, the oil sands of Alberta, Canada — a scene of widespread environmental destruction — are producing oil at roughly $55 a barrel. And the cost of producing oil from shale is even higher.

MCW’s (MCWEF) successful plant opening means that plans are already underway to open an even larger plant, capable of processing 912,500 barrels of oil a year, at the Temple Mountain property.

This larger plant is expected to drive production costs down by at least 33% to just $20 a barrel, nearly doubling MCW’s profit margin at current prices.

Licensing its technology could become a hugely profitable business for MCW:

The world is covered in oil sands — and oil companies around the globe are looking for ways to tap them without ruining the environment. For example...

This spells huge opportunity because it could provide MCW (MCWEF) with a lucrative source of income from licensing its technology to companies eager to tap those reserves. In fact, this licensing could very well be worth more to MCW Energy and its shareholders than the revenue it generates from the oil itself.

It’s also possible that the technology could be used to clean up after oil spills.

For example, we believe MCW’s technology could have a made a big difference in cleaning up the beaches and swamps of Louisiana after British Petroleum's disastrous Deepwater Horizon spill.

It could also be used to clean up the ravaged landscape surrounding Alberta’s famous oil sands. 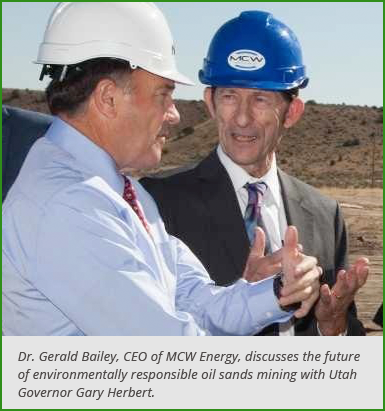 Low oil prices have created an oppor- tunity to get in while prices are low:

Low oil prices have scared many investors away from oil investing. Yet we blieve this is actually an opportunity to “buy low,” and possibly reap the rewards when oil prices begin rising again.

As Mike Larson, a key analyst for Weiss Research, says, “In the past, every time oil prices have fallen this low, this fast ... without exception ... they have rebounded with a speed and force that leaves investors stunned.”

Go online or call your broker today to learn more about MCW Energy Group Limited (OTCQB: MCWEF — TSX-V: MCW.V). We believe it is an opportunity to get in on the ground floor of an under-the-radar company that is poised to grow significantly in the months and years ahead.

What the Experts Say... 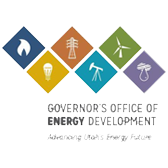 
According to the Department of Energy, “The P.R. Springs and Asphalt Ridge tar sand deposits in Uintah County, Utah, contain an estimated 15 billion barrels of bitumen and heavy oil with estimated potential reserves of 4.7 to 7.3 billion barrels.”

DISCLAIMER: The information contained herein is based on information generally available to the public and does not contain non-public information. Readers should perform their own due-diligence before investing in any security, including consultation with a qualified and registered investment advisor. This is not an offering of securities for sale. An offer to buy or sell securities can be made only with accompanying disclosure documents and only within jurisdictions wherein an offer is approved for sale. Past performance is not a reliable indicator of future results. Investing in equity securities is risky and may result in investors losing all or more of their invested capital. The use of margin or borrowed funds raises the possibility of loss beyond the principal amount invested. The information contained herein should be considered entertainment. This content might contain "forward-looking" statements or information regarding expected growth of a public company. "Forward-looking" statements are based on estimates, expectations, or projections at the time the statements are made and involve risks and uncertainties that could cause actual events to differ from anticipated events. "Forward-looking" statements may be identified by the recognition of words such as will, anticipates, expects, estimates, believes, or by statements indicating that certain events could, would, may, should, or might occur. Any statements that express or involve objectives, expectations, predictions, beliefs, plans, projections, or goals of future events or performance might be "forward-looking" statements. Therefore, in accordance with the safe harbor provisions of the United States Private Securities Litigation Reform Act of 1995, the publisher notes that statements contained herein that look forward in time, which include all information other than historical information, involve risks and uncertainties that may affect the company's actual operating results. Factors that could cause these actual results to differ include, but are not limited to, the size and growth of the market for the company's products and/or services, regulatory uncertainty, the company's ability to raise funds for its capital requirements, pricing pressure and other risks detailed in the company's filings with the United States and Canadian securities regulators. The publisher has relied on historical results from multiple sources in the evaluation of the company MCW Energy Group Ltd. (hereinafter "MCW Energy"). This paid advertisement does not purport to provide a reliable analysis of any company's financial position, operations, or prospects and this entertaining information should not be construed as a recommendation nor a solicitation to buy or sell any security. All information is provided for entertainment purposes only and should not be relied upon by the reader when making investment decisions. The distribution of this advertisement or its information might enhance broader public awareness for MCW Energy and therefore be considered a conflict of interest for one or more of the parties who paid for this advertisement. Although the information contained within this advertisement is believed to be reliable, the publisher makes no warranties as to the accuracy of any of the content herein and gives no advice as to how readers may choose to utilize the content. Readers should independently verify all statements made herein and perform extensive due diligence on this or any other advertised company. The authors and/or endorsers and/or publishers might have received compensation for this advertisement and/or related marketing materials relating to MCW Energy. No one featured in this advertisement represents to be a broker, or registered investment advisor, or dealer of financial securities. Research and any due diligence was conducted by outside researchers during the creation of this advertisement. More information can be received from MCW Energy's corporate website. Furthermore, MCW Energy's financial filings and disclosures can be retrieved from the Securities and Exchange Commission website at http://www.sec.gov/, or appropriate regulatory agency in foreign countries, including SEDAR in Canada. Many states have established rules requiring the approval of a security by a state security administrator; concordantly this advertisement is not intended for readers in any jurisdiction where not permissible under local regulations, and investors in those jurisdictions should disregard it. Check with http://www.nasaa.org/or call your local security administrator to determine whether a particular security is fully licensed for sale in your place of primary residence. Any investment should be made only after consulting with a qualified and registered investment advisor and only after reviewing in full the financial statements and other pertinent corporate information related to the security.